The coherent oscillations of mobile charge carriers near the surface of good conductors-surface plasmons- have amazing properties. Light can be coupled to these surface plasmons and trapped by them near the interface with an adjacent medium. 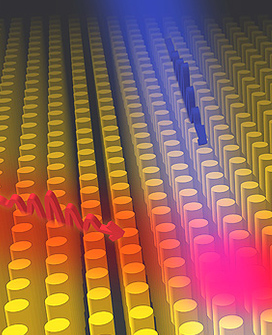 This leads to the nanoscale confinement of light, impossible by any other means, and a related electromagnetic field enhancement. The associated effects and applications include high sensitivity to the refractive index of surroundings used in biosensors, enhancement of Raman scattering near the metal surfaces used in chemical sensing and detection, enhanced nonlinear optical effects, localised light sources for imaging, and many others. At the same time, the influence of the electrons which participate in the formation of surface plasmons on the surroundings of the metal nanostructures is also important. Microscopic electron dynamic effects associated with surface plasmons are capable of significantly influencing physical and chemical processes near the metal surface, not (only) as a result of the high electric fields, but also from the transfer of energetic electrons to the adjacent molecules or materials. We will study physics and harness applications associated with such electronic processes, induced by plasmonic excitations, in designer nanostructures. This will open up new paradigms in ultrafast control over nanoscale chemical reactions switchable with light, optically controlled catalysis, optical and electric processes in semiconductor devices induced by plasmonic hot-electrons, as well as nanoscale and ultrafast temperature control, and many other technologies of tomorrow.

The term 'plasmonics' refers to the science and technology dealing with manipulation of electromagnetic signals by coherent coupling of photons to free electron oscillations at the interface between a conductor and a dielectric.