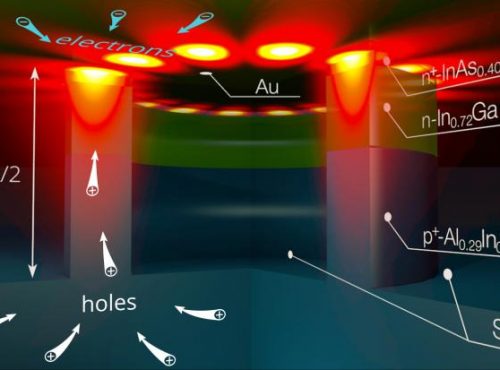 Reactive Plasmonics researchers, in collaboration with a team at Moscow Institute of Physics and Technology have developed a concept of an electrically driven nanolaser which is not only much smaller than the other integrated lasers but even smaller than the free-space wavelength it is emitting.  The researchers, led by RPLAS PI  Professor Anatoly Zayats, have previously reported on nanoscale electro-optical modulators and together these nanodevices will mark a milestone in the development of fully functional highly-integrated optoelectronic circuits for optical data communication.

Once incorporated into electronic computational chips, such circuitry will revolutionise on-chip data transfer, substituting ‘slow’ and lossy metallic wiring overheating the chip with broadband and energy-efficient optical network. This means that the best technology for data communication (photonics) will be merged with the best technology for data processing (electronic), leading to hybrid electronic/photonic chip architecture with superior computational power.

Nanolasers have been at the edge of nanophotonic research of the last decade. However, the vast majority of the proposed designs utilise optical pumping schemes, requiring high-power ‘ordinary’ external lasers, which makes their practical application challenging. Electrically-pumped nanoscale counterparts met a fundamental problem when the Ti- or Cr-based low-resistance contact required to supply the electrical pumping to the optical mode simultaneously did precisely the opposite introducing unacceptable losses related to the optical absorption in the metals. The researchers have now solved this problem by proposing a novel electrical pumping scheme based on a tunnelling Schottky contact, which gets rid of highly-absorbing materials and supplies the electrical power with no loss penalties. Furthermore, the contact simultaneously confines the nanoscale optical mode in the form of surface plasmon polaritons in its vicinity – precisely in the region of most efficient amplification. Importantly, the nanolaser operates at room temperature and emits light directly into an optical waveguide, which makes it easy to integrate it into the optoelectronic circuitry. Despite the nanoscale dimensions the emitted optical power of a single nanolaser is high enough to transmit 100s of Gb/s of data, matching record-high data speeds.

The article Lasing at the nanoscale: coherent emission of surface plasmons by an electrically driven nanolaser was published in Nanophotonics